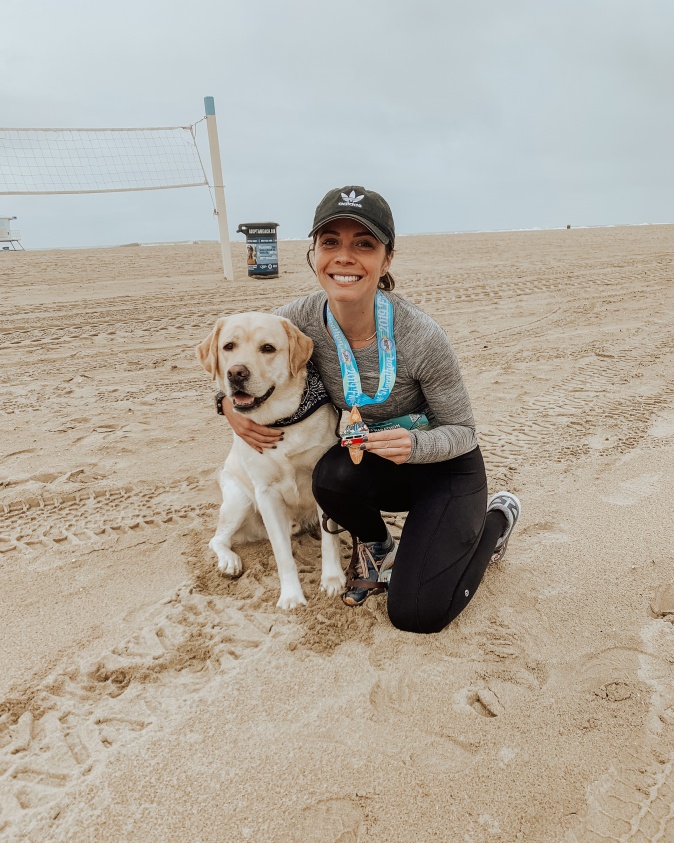 On Sunday, February 3rd, I crossed the finish line at the Surf City Half Marathon for the 4th year in a row and my 18th half marathon! The Surf City Half is one of my favorites. It takes place along the water in beautiful Huntington Beach, California on Super Bowl Sunday every year. It’s the perfect way to kick off the day before the football festivities begin!

My training for this race was very unconventional. Back in the fall I originally wanted to train for this race using my running coach but I decided as it got closer to the race I needed to still focus on rehabbing my knee and getting stronger in the gym. I also had some major changes in my life so training for a race wasn’t going to take priority like it has in the past.

My training for this race consisted of building my weekend long run mileage and gym workouts that included strength training, intervals on the treadmill, lots of core! I really enjoyed “training” for this race because I didn’t put pressure on myself to hit the strand every morning to run.

About a week before the race I received an email confirming that I was signed up for the full marathon, not the half. I freaked out for a few minutes before I realized I could downgrade to the half. I don’t know how I made that mistake when I was registering for the race but it was easy to fix!

My good friend Rebecca and I headed down to the race expo the day before the race. The weather was AWFUL and I started to worry that it was going to be that bad on race day. I ran the Portland Marathon a few years ago in the rain and it was miserable. After that marathon I told myself I would never run a race in the rain again, it’s just not enjoyable! 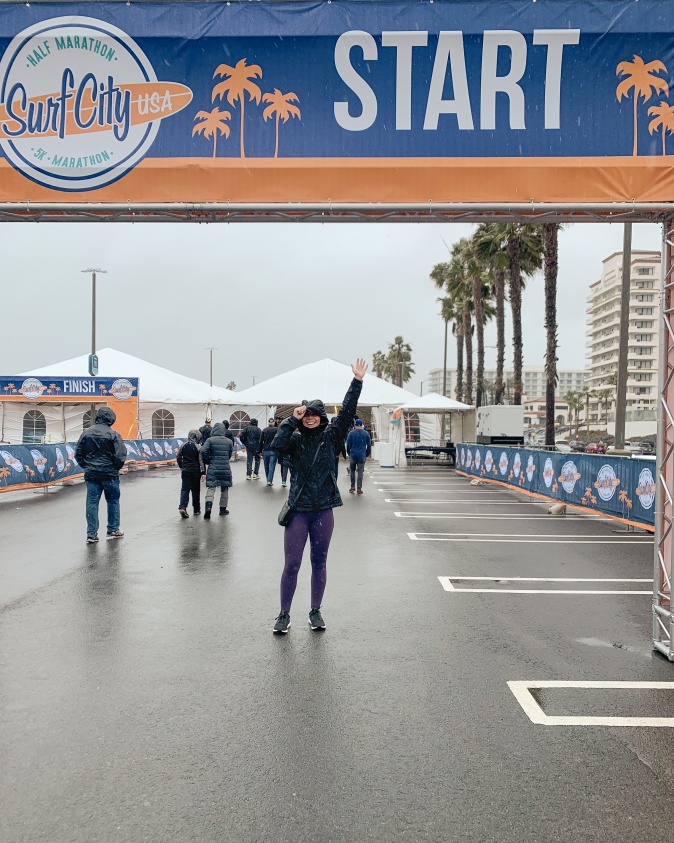 Once we made it to the expo, we went to the half marathon table to grab our bibs and I was told my registration had been transferred. I went over to the solutions table and found out that when I had downgraded from the full to the half marathon I actually signed up for next years half…. whoops! I  don’t know how I managed to do that, but they were able to fix it for me so I could run in Sunday’s race.

Rebecca and I walked through the expo and took lots of pictures, trying to make the best out of the rainy day! 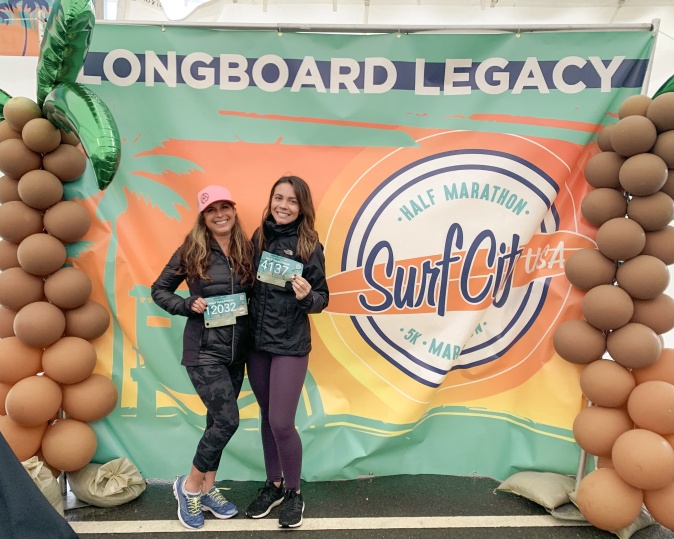 The night before the race I decided to head back down to Huntington Beach to stay at The Kimpton Shorebreak Resort, which was located right near the start line of the race! The hotel was dog friendly, so I was able to bring Leo with me too! They were so accommodating to Leo once I arrived, and even had a VIP wall for all the pets staying overnight in the hotel!

After settling into the hotel, I had dinner at Pacific Hideaway, the restaurant located in the hotel. I probably ate more than I should have before the race- wine, salad, lettuce wraps, and the most amazing cookie skillet ever but I reminded myself that I was going into this race not trying to break any records. This weekend was able enjoying myself and having fun! 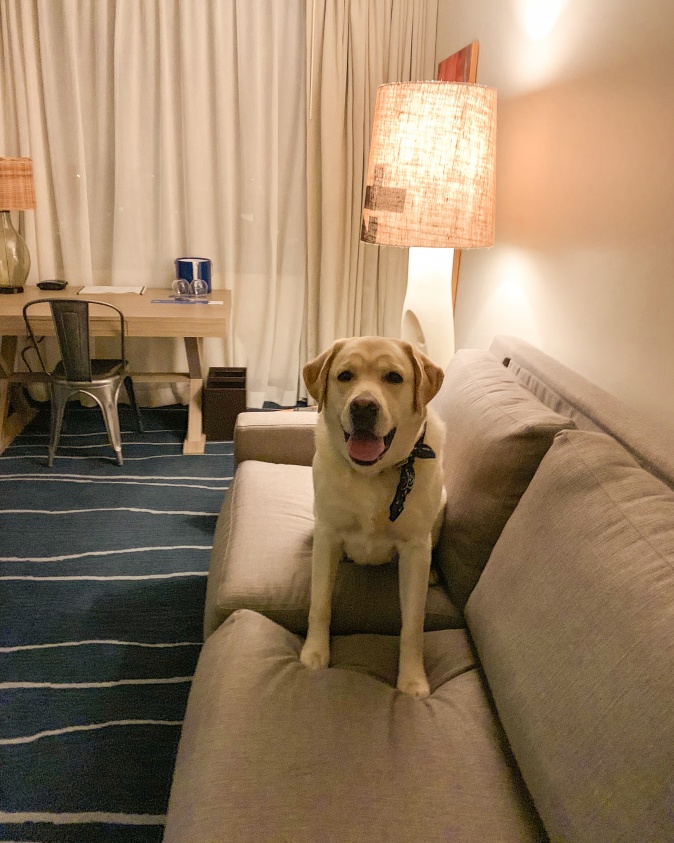 Leo at The Shorebreak Resort! 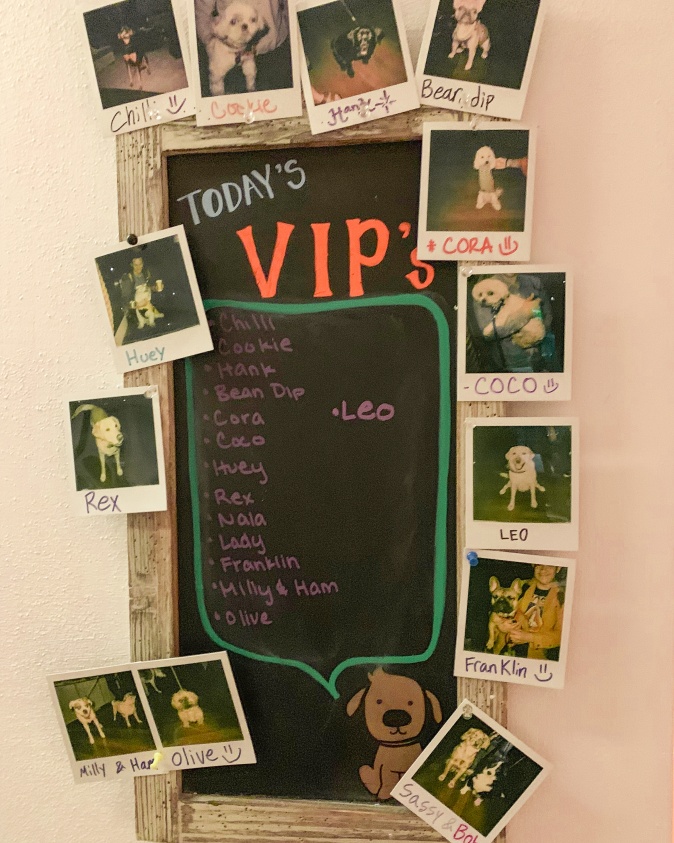 Leo made it to the VIP wall! 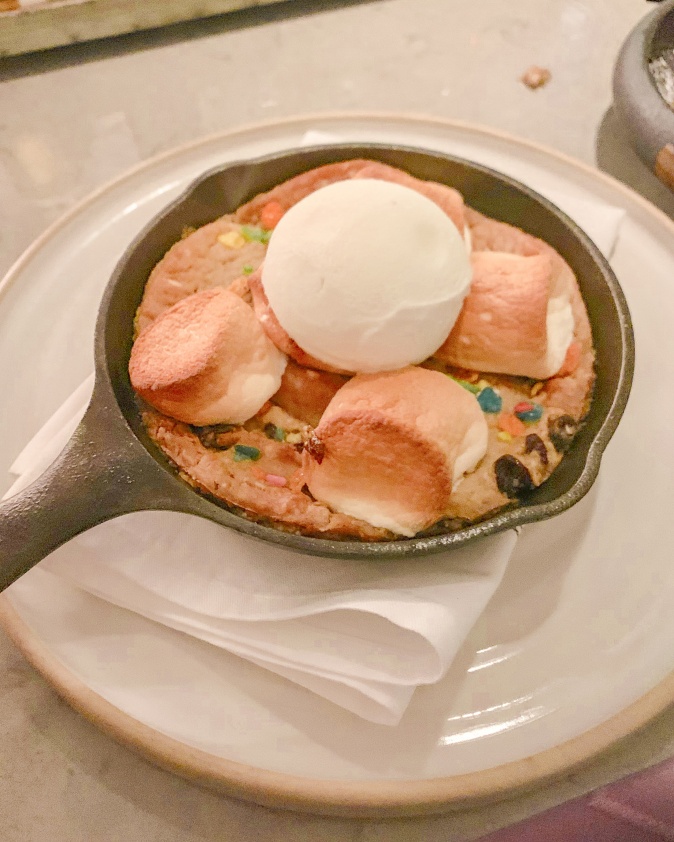 On the morning of the race I woke up and had a Go Macro bar and banana then brought Leo outside to go to the bathroom. The rain had stopped but it was still chilly and windy out. I went back to my room, did my band exercises and warm- up, then ran 1/2 mile to the start line to meet Rebecca and Shelly. The sun was coming out and it was starting to warm up a  bit! 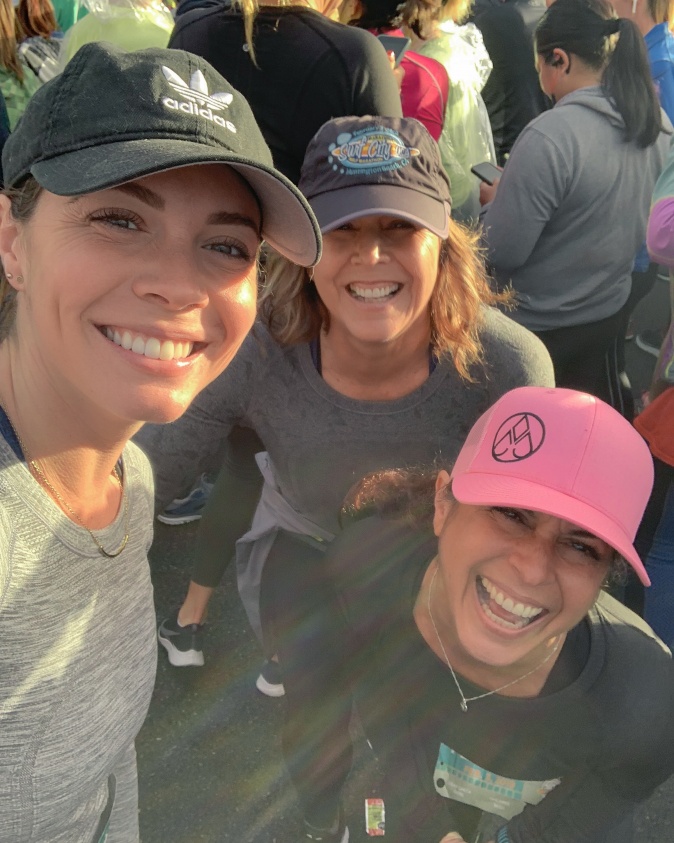 The race kicked off at 7:45 am. I felt strong and was able to hold an 8:10-8:25 pace for the first 6 miles. Once I hit mile 4, the rain started again and I was into the rolling hills part of the race. The rain was light, but continued on and off for the next few miles. I started feeling a little sluggish around mile 6, so I took my gel and then powered through the next few miles. The last 5 miles of the race were probably the toughest though. There was a strong headwind on PCH heading to the finish line. My pace slowed down a bit, but I still did my bet to push through the wind. 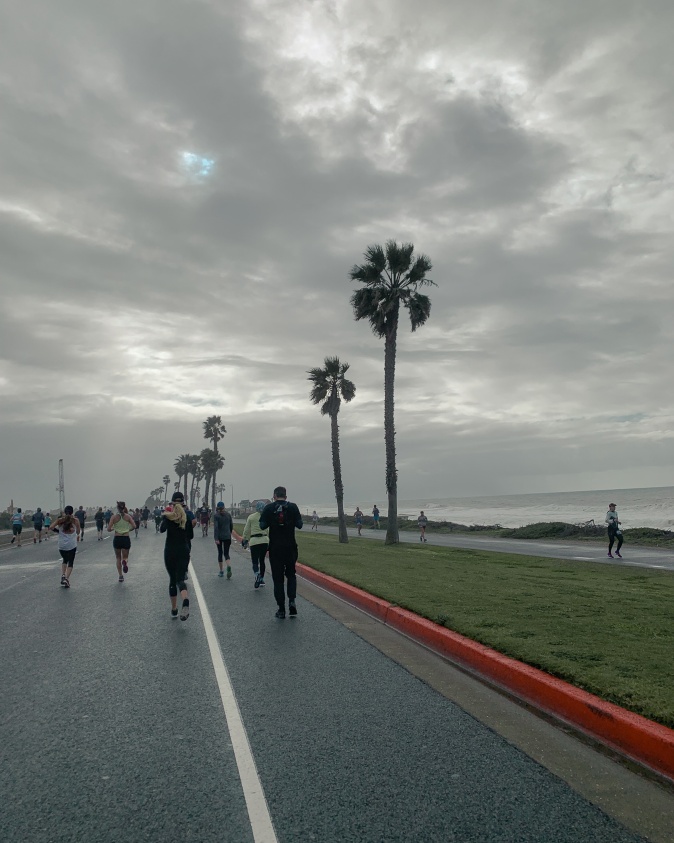 I crossed the finish line with a final time of 1:54:54 with an 08:46 pace. This was 13 minutes faster than my last half, which I had to stop and walk multiple times because my knee pain was so bad. The Surf City Half Marathon definitely helped show me that I can be a strong runner again. Even if it wasn’t a PR day, I felt like my old self running again! 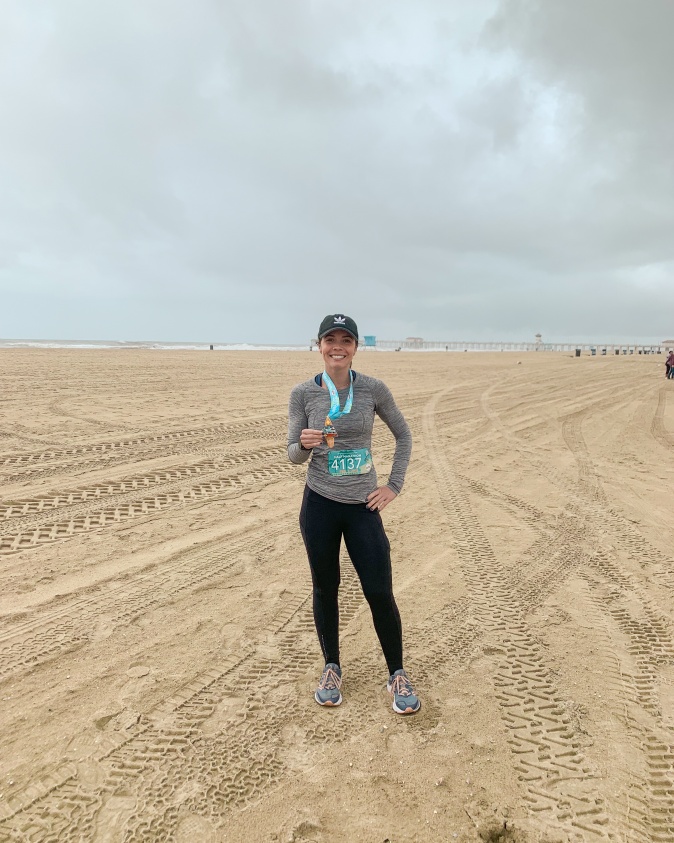 I haven’t shared my race finish times in a while on social media. To be honest I have felt embarrassed and disappointed in myself with my times. I used to run a half in 1:43 and I always thought people would look at me and think— “Wow, she’s really slowed down.” But I finally realize I am in a different season in my life and running a personal best every race just isn’t priority. My goal this race was to run pain free, no matter how fast or slow I was. Maybe my speed will come back or maybe it won’t, and that’s ok! I love running because it’s my therapy, my time to myself, my time to think and reflect. Running is more to me than fast race times!

After the race we went to the MOST AMAZING acai bowl place, conveniently located right next to the hotel at 602 Coffee House. I ordered the power bowl made with acai, bananas, peanut butter, strawberries, blueberries, and topped with granola, honey, peanut butter, and toasted coconut. I also got a side of avocado toast that was delicious as well! It definitely hit the spot after the race! 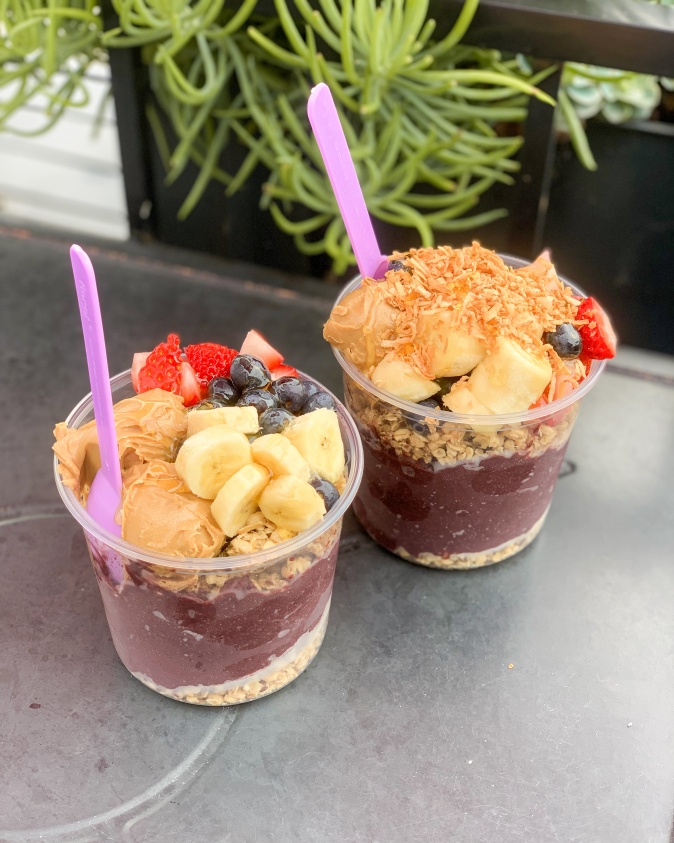 What’s next on my race calendar?

I still need to look at my calendar for the spring and see what race I want to run next. I definitely want to seriously train for another half and work on improving my time now that my knee is better, I’m just not sure which one that will be! I’ll keep you guys posted! 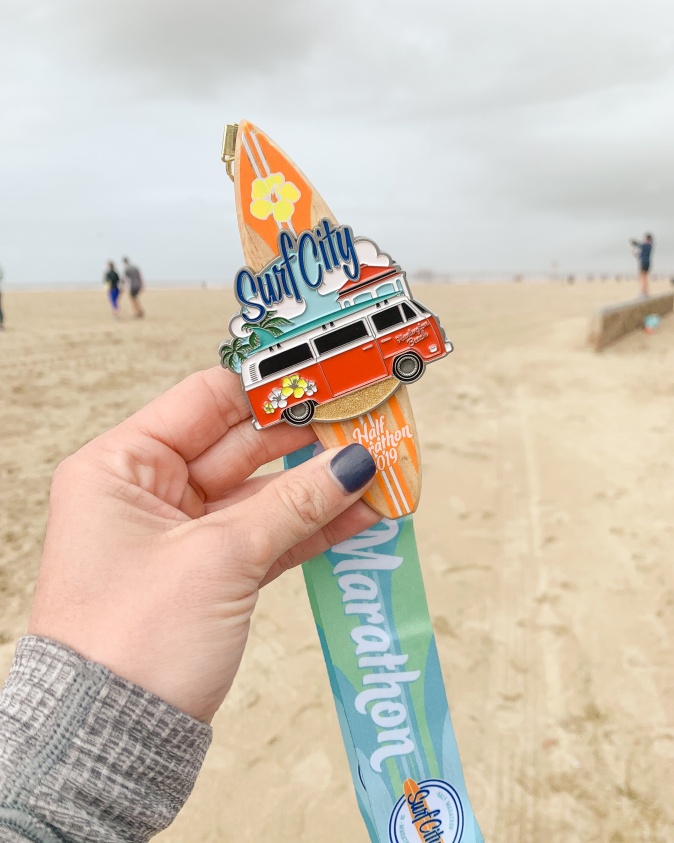 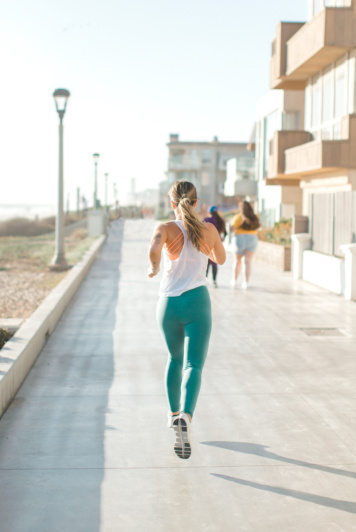 Should You Strength Train or Run First? 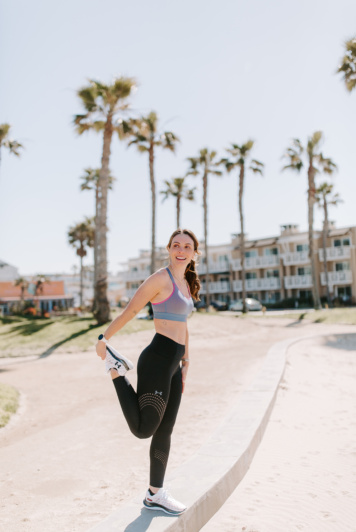 Should You Strength Train or Run First?

4 Ways to Maintain Your Running Routine on Vacation