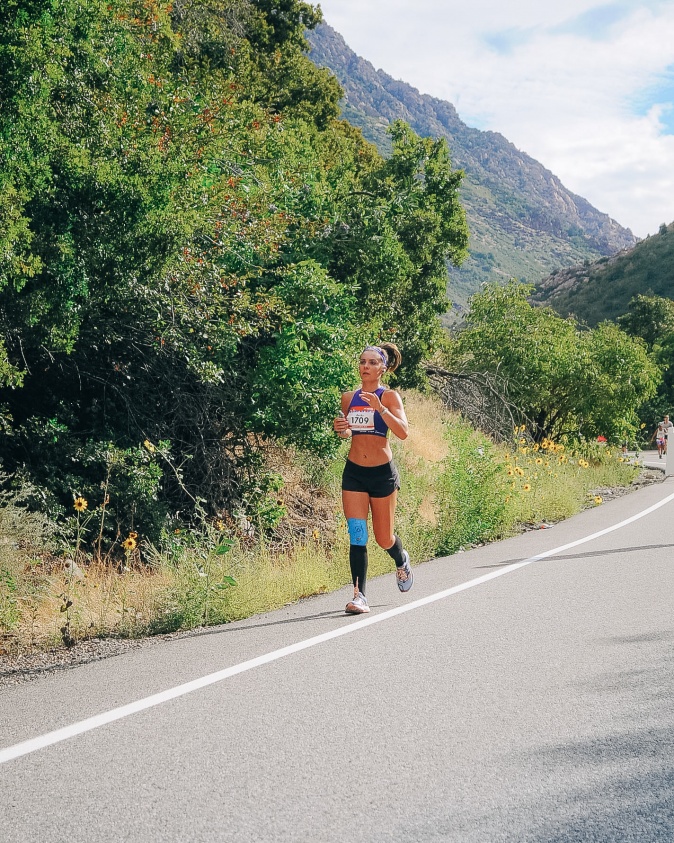 4 months of marathon training is over! I can’t believe how fast it went by! On Wednesday before the race I saw my physical therapist one last time. She asked me what my plan for the race was and I honestly didn’t have one at that point. The second half of my training cycle I  was mainly focused on being healthy enough to race, so I hadn’t come up with a race strategy yet. She suggested that I run/walk the race— if I  started walking earlier, my walk times would be faster than if I started walking later. After PT, I headed home to hop on a call with Toni (my running coach) and go over my race strategy. We decided that running/walking was probably the best option to help protect my knee. We also made a plan for me to walk through the aide stations. I have never gone into a race thinking I would have to walk. At first I felt a little discouraged, I wanted to run the whole thing. But after battling a knee injury during this training cycle, I was just happy to even be racing and walking wasn’t a bad option. I was actually glad I mentally prepared myself to walk— that way I wouldn’t be disappointed if I had to during the race.

Rob and I left for Park City Thursday morning. I was glad we were getting there a few days early so I could acclimate to the elevation. We stopped at Whole Foods on the way home from the airport so that I could stock up on food before the race. Friday morning we met up with Ally from Kodiak Cakes to have breakfast! We went to Five5Seeds in Park City- it was the cutest Australian cafe. I ordered an almond milk latte with avocado toast and Rob ordered the hot cakes. I had trouble keeping my hands off the hotcakes! After breakfast, we headed to the race expo located in Salt Lake City. We were in and out of the expo in 10 minutes! It was probably the least stressful race expo I’ve ever been too! After the expo we headed home for the rest of the day. I  just wanted relax and get ready for the race and Rob had a lot of studying to do. I  cooked up my favorite long run dinner— Eat Banza pasta with zucchini noodles, brussel sprouts, sautéed tomatoes, chicken sausage, and bolognese sauce! 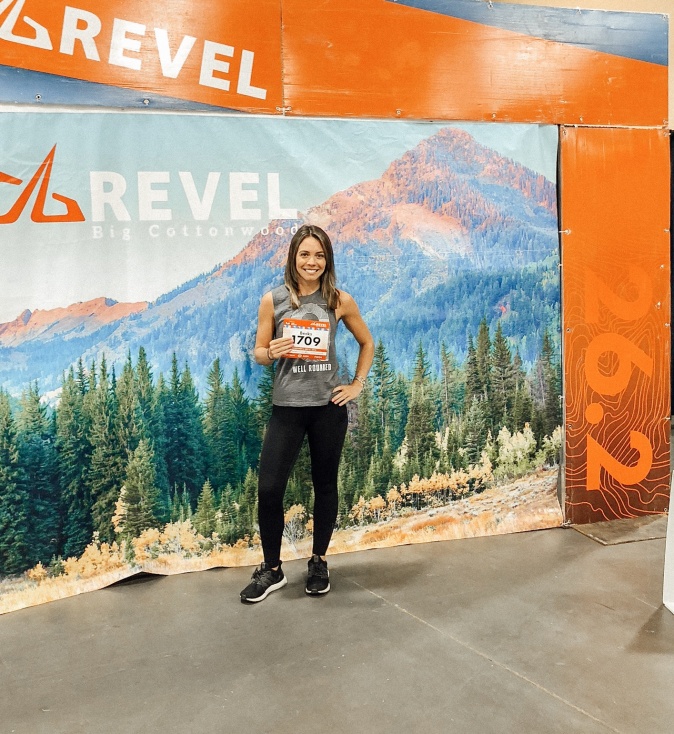 My alarm went off at 5am on the morning of the race. Since Rob’s house is on the opposite side of the mountain (from where the starting line was), he was able to drive me up the backside of the mountain and drop me off. This saved me from waking up at 3:30am to drive down to Salt Lake and take the shuttle back up!

The morning of the race I had my usual Purely Elizabeth oatmeal cup topped with 1/2 banana, 1 tbsp peanut butter, 1 scoop collagen peptides, and water. I usually have this combo before a long run or race because it’s easy on my stomach and keeps me fueled throughout the run. I also had glass of water with 1 tablet of Nuun mixed in.

At 6am Rob drove me to the top of Guardsman Pass, which is where the starting line was. I  thought it was going to be freezing up there, but it wasn’t bad! I did have gloves and a blanket wrapped around me that the race provided us with, but I tossed them as soon as the race began! The start of the race wasn’t stressful at all! I felt so at ease at the top of the mountain. I hit the bathroom one last time, finished stretching, then lined up and it was go time! I didn’t even have to wait at the start line, I just crossed when I was ready! I wish all races could be this easy! 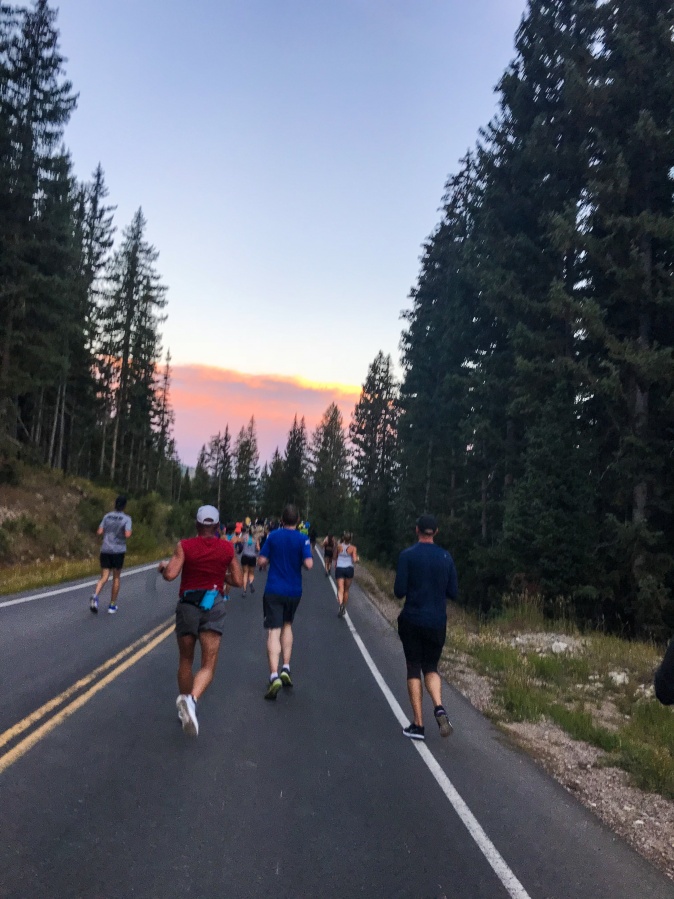 Still can’t get over these race views! 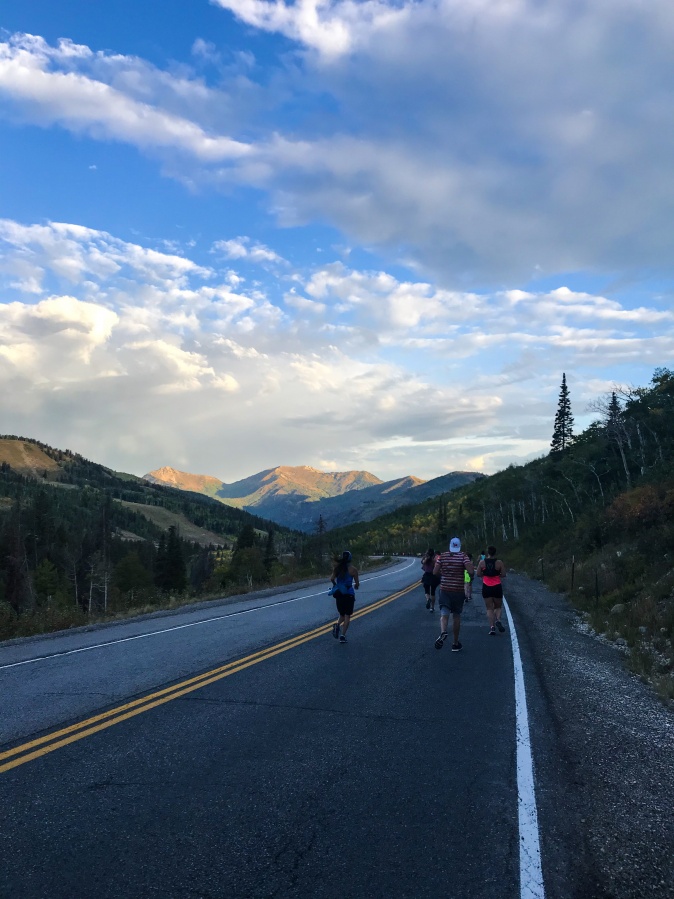 The race started with a straight down hill through the canyons until mile 3. My pace for the first two miles were 8:08/mile and 8:30/mile. I knew this was still too fast for me– I was aiming at keeping my pace around 9:00/mile so that I didn’t blow my quads out too early. I  ran Revel Mt Charleston a few years back and went out WAY too fast in the beginning because of the steep downhill. I didn’t want to repeat that again. Once I  got to mile 3 there was a slight uphill to Brighten Resort. I thought this would be a good time to walk a little bit as I headed into the first aide station. After I grabbed some water I started running again.

I had my first gel around mile 6. I wanted to make sure I got my fuel in early rather than later so that I wasn’t playing catch up.

At the half marathon point, it started to rain a little bit and the downhill started to feel like it would never end. At this point in the race I really started alternating my running with walking. I walked a bit at the beginning of mile 14, ran at 14.25 miles, and then walked again around mile 15. Mile 15 brought steeper downhills and lots of sharp turns through the canyons. My quads were really starting to fire upt. Luckily I had no knee pain even though my quads wanted to explode. I fueled again around mile 15— this was later than I would usually have a gel, but I didn’t feel like I needed one until this point.

The race finally leveled off around mile 18. This part of the coarse exited the canyon and headed north for an out-and-back. There was actually some uphill in this part of the race. I was able to push hard up some of the hills faster than I was running on the downhill portion. I felt great once I reached mile 20 (well besides my quads wanting to die), but I just kept alternating running with walking, and didn’t focus on my time. I also was so excited to have made it this far in the race without knee pain!

Once I got through the out- and- back at mile 23, it was all downhill to the finish. Unfortunately at this point my legs were done and my headphones died. I went from feeling so excited and strong, to wanting to just give up. I didn’t have my music to keep me going and really couldn’t run anymore. I was in so much pain and everyone around me looked like they were too. I tried to pick my pace up and run a few times at the end, but I really couldn’t and had to stop and walk. When I finally saw the finish line, Rob was there cheering me on. I was able to pick up my pace a little and hobbled to the finish. It definitely wasn’t a pretty finish, but I didn’t want to cross the finish line walking.

After I crossed the finish line, Rob came over and gave me a big hug. We took some photos and then walked to the car to have my Lenny and Larry’s cookie— I have one after every marathon… it’s my little tradition 🙂 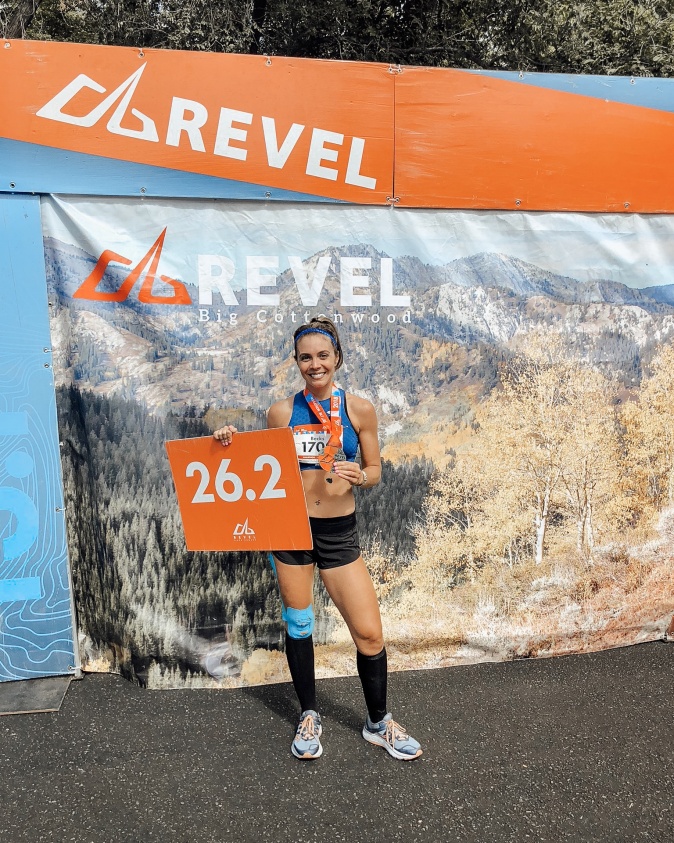 We drove back to Park City and went to my favorite cafe for brunch, Harvest Cafe. I ordered an acai bowl, avocado toast with a poached egg, and Rob ordered the banana bread for us to share. It definitely hit the spot after the race. 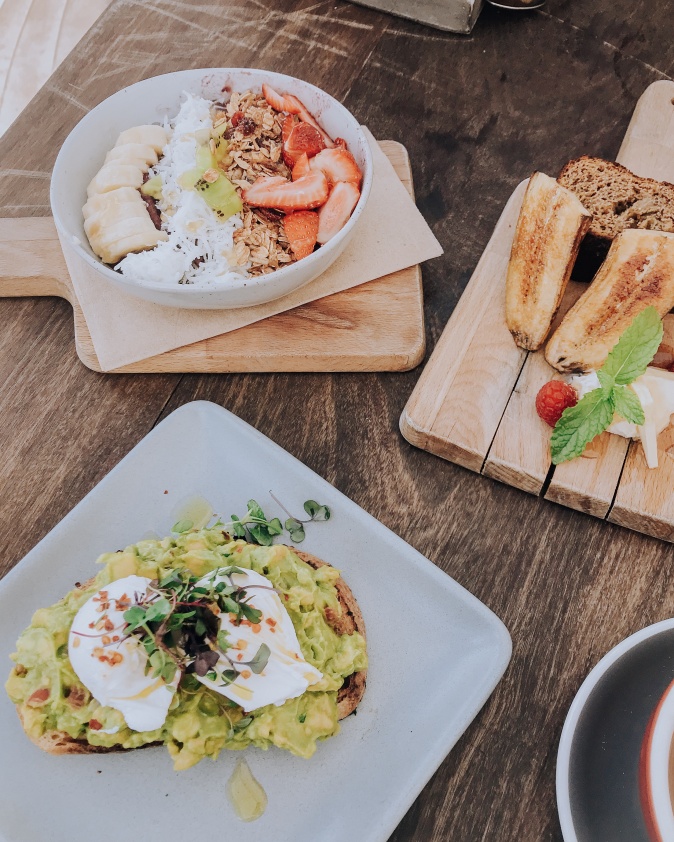 Revel Big Cottonwood was my 7th marathon. Although my time wasn’t my best, this race  will always hold a special place in my heart. I never gave up on this marathon despite my knee issues throughout my training cycle. Giving up on this race just wasn’t an option for me.

After I recover from Big Cottonwood, I plan on running the Long Beach Half next month! It will be the last race I will need to finish the Beach Cities Challenge (the challenge also includes The OC Half and Surf City Half, which I have ran this year as well). I also want to put my focus back on strength training again and start creating videos for you guys!!!

And now to answer your race questions!

After the race I reached out on Instagram to see if you guys had any questions about the marathon or my training cycle. Let’s get started!

What was your in race nutrition?

How was the decline? Did you train for it?

My running coach had me training on uphills and downhills early on in my training cycle. Because of my knee I stopped doing any hill workouts, tempo runs, or track workouts.

Thoughts at mile 20 and how you overcame the “I want to quit, I’m so tired” feeling!

I actually felt great at mile 20, it was mile 23 that I felt this way.

3 miles until the finish line felt like forever and the downhill was still pretty steep. I was so frustrated because it hurt too much to run and my headphones had just died. I lost a lot of motivation, but I was SO close to finishing so just kept going, one stride at a time. I broke the rest of the race up into landmarks and just focused on getting to the gas station or telephone pole in front of me, and then I made a new landmark to reach.

How did you fit strength training into your training plan?

I actually talked about this in a previous blog post- I’ll link it here!

How do you get through it mentally?! I’m about to run my first marathon and I’m so nervous!

Try to mentally prepare yourself for the race! It doesn’t matter how hard you train or how fit you are, you are going to hurt at some point (probably around miles 17-23). Try to get comfortable with being uncomfortable in your training runs and it makes those miles in the race a little more bearable! If you go into the marathon knowing it’s going to be hard, it really won’t be as bad as you think. Just take one mile at a time during the race and before you know it the marathon will be over!

How long was your longest training session run?

My longest run was 18 miles. In the past I have ran up to 20, but my knee didn’t allow for that this time. I also had to break my 18 miler up into smaller runs in order to get it done pain free.

What are your best tips for helping with “runner’s knee” or a tight IT band?

Knee pain and IT band pain are often caused by a weak glute medius and tight hip flexor.

The best way to help with the knee pain is to strengthen the glutes!

Lateral band walks, clams, & glute bridges (these were all a part of my maintenance plan going into the race)

Before heading out for a run, perform one of the above exercises to wake up the glutes and also make sure to stretch those tight hips (a runner’s lunge is great for opening the hips). 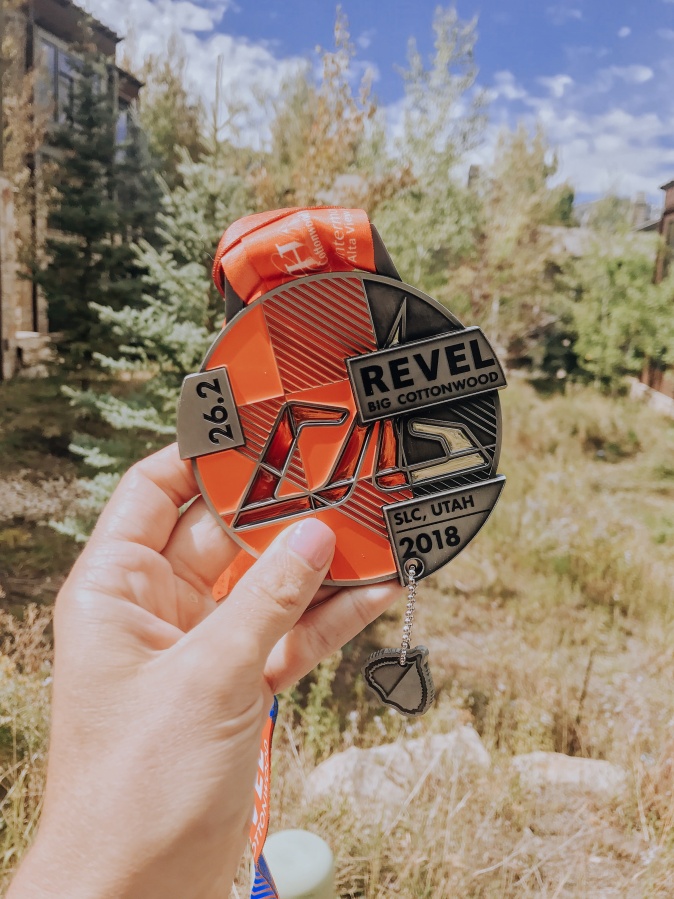 Thank you to everyone who helped and supported me in my journey to another 26.2! If you have any other race questions— feel free to reach out to me! 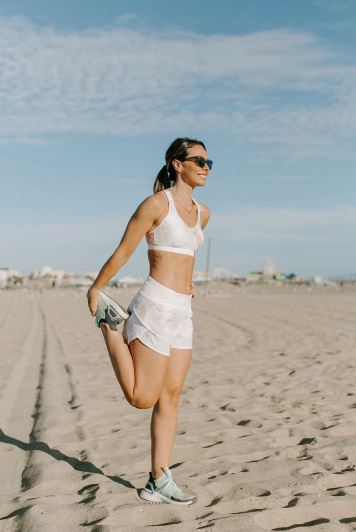 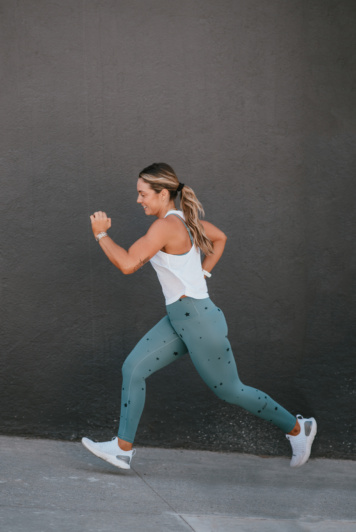 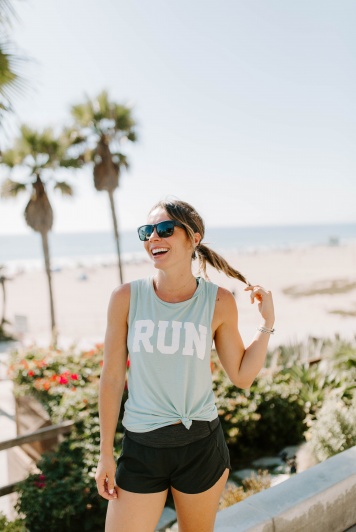 My Current Half Marathon Training Plan